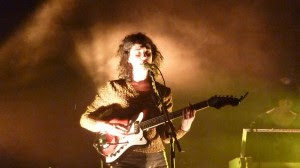 On Monday, St. Vincent stopped by Conan on a night where Kate Beckinsale’s hotness almost blew up my television. Another artist that will be at Coachella 2012 they were introduced and strummed a few chords of an Elvis Costello-ish sounding tune. Then, just when it’s about to break Annie Erin Clark waves her hands in the air demanding the band stop. She then says into the mic “I’m sorry ladies and gentleman, there is no reason to play that song”, before diving into the beautiful track called “Cheerleader”.

Now the only thing this writer knows about St. Vincent is the stuff I read here at Concert Confessions, so I actually had to go listen to the song Cheerleader afterwards to see if this is how the song actually goes, or was that just an audible called at the line of scrimmage last minute. Turns out, it was an audible. Not that “Cheerleader” is filled with F-Bombs or anything, but imagine if it was? How cool would that would’ve been? Either way, the video below should share with you not only the coolness of this band, but also a really bad ass guitar.