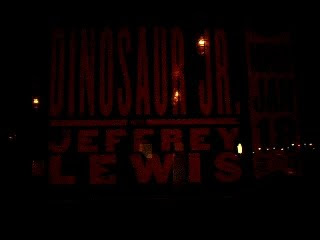 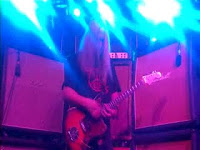 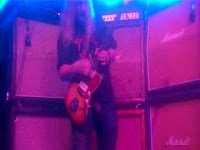 Must say it was the most interesting place I’ve seen a show. I’m Jay Porks, and Welcome to the twenty second installment of the Jay Porks Never ending concert series for Dinosaur Jr!!!!… tonight takes us to Williamsburg, to the Brooklyn Bowl, which I know- sounds like a bowling alley. It actually IS a bowling alley, along with being a pseudo-fancy restaurant, it’s equipped with16 bowling lanes(each lane with a big screen on the end, showing a movie) to the right of a small concert stage… The space where use concertgoers will be standing is pretty basic… it’s larger than I thought but still basic-just a floor. No ramps leading to higher seating, no side barricades. I see J. Mascis'(JM) three tan/beige double stacks Marshall amps being covered by a white sheet. Feel like I’ve been here for ever but it’s still early, 7:08 actually and a few people are beginning to show up. Like ten maybe…There are people currently bowling- I wonder if that will continue throughout the show…. now that would be one cool bowling alley-when I used to go bowling on school trips to Gil Hodges Lanes there were never any bands playing.. just older women and cigarettes(something I had no use for at the time, but now would love to be around both) 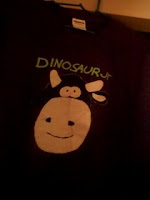 I found where the merch chick was, and she had 20 dollar tee shirts…sold. There were also copies of Dinosaur Jr.’s new record “Farm”, and it came with a free hat. I already have a copy so I wasn’t buying another one just to get the hat, so when about to ask how much for just the hat I read a sign that said “ No, you can’t just by the hat. Why? Because we said so”… Ok, so much for that hat. After buying my shirt I went out to smoke to find no one of interest out there. Now here’s the dilemma- do I head in and sit in the dark and wait two hours for the show to start or stay out here in the cigarette smoking zone to spot incoming concert goers?…Well there’s no WiFi in this place (figures, never WiFi where I need it).. AnywayI decide to come in but sit on a couch looking right at where the merchant is being sold. If someone interesting is gonna pass by then this is the place to be. Take in mind it’s 7:16pm. Two hours til show, and I’ve already limited myself to being within 10 feet of the door to this place for the next five hours…

It’s coming up on 8:33 and this place still isn’t packed out to the capacity it will be- I mean the show is set to start in a half hour So, I gave them there chance-now I’m headed to the front row, where nobody is standing directly in front of where JM is going to be standing. Plop, I’m there. I got one dude shouting out how cool my shirt is ( “your favorite band sucks” with JayPorks.Com on the back). Looking at those stacks up close I realize that I will be deafened by the guitar amps.. Sweet. One thing I don’t see any of: event staff, which bodes well for me trying out my new Flip video camera….about 8:51, the house music plays Tom Petty- The Wait…. If they only knew 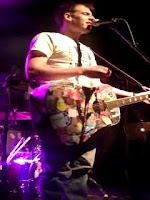 8:57- and here’s Jeffrey Lewis setting up.. Looks like he’s solo. He has a little toy keyboard on the floor and a really funky looking acoustic.. He gets into his first song at which point I look at my vacant wrist because this is unentertaining.. He’s just singing and playing guitar as if he was playing for free or something on a street corner.. I was looking for his change bucket, didn’t I just see this dude on the ‘L’ train?. He had some weird, trying to be comedic slide shows going- there was one about the Indians getting there land stolen and another was an old school, black and white detective short. I thought I was watching the discovery channel or something. He also had a what he called “gangsta rap” about ” killing misquitos “…. Probably the most enjoyable part of his set. He went off at 9:44…now we await who we all came here to see..

It wasn’t until Jeffery Lewis’ set did I realize the big screens in front of each bowling lane would be used to project the stage happenings… These screens were showing “kill bill” (I think) before we started and now everyone was bowling towards Jeffrey Lewis’ history lesson. Yes the bowling continued as the show went on, with bowlers leaning over the rail to check out what was going on in between frames, it was a really cool atmosphere from where I’m standing, because I can see 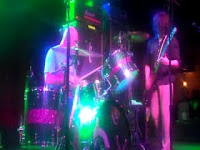 peoples scores as well having my face on an amp. And I see JM walking around-he tends to do this-he walks around like he’s a nobody seeming trying not to be noticed-he thinks he can get away with it, I mean.. rock star journalist’s like yours truly aren’t going to go running over like a prissy little fan boy, but I figured others would. I mean, dude has long platinum hair, how could you miss it? It looked like he was moving along just fine with little to no bothering by anyone…. I guess this is a hipster town after all. Rounding the corner on 10:15PM when they hit the stage, the one the only DINOSAUR JR!! 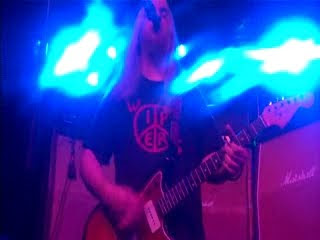 Kicked off the set with “Thumb”, first of all you knew it’d be a kick ass show when JM is wearing a Wipers tee shirt. Love the Wipers… anyway, right from the start- the first touch of chord my ears went numb almost-this was loud, noisy and distorted… and rocking! Every time JM touches the chord it explodes, and did you see his effects pedal set-up? Look at this: Your kidding right? There’s like 100’s of different sounds you can alter you guitar to-how do you remember which ones which ,when I can’t even ride a bike? As they get into songs like ‘In a jar’ and ‘Budge’ you just become a witness to cerebral assassinations of instruments We got the extended version of “Pieces”, a song I happen to love off the new record “Farm”-somewhere between this song and “Plans” and “Pick me up” which followed, was where Mascis just completely gave this this six string a total beat down-he was killing it. He plays a Fender Jazzmaster, which is a discontinued model but Fender provides JM with custom guitars (I hear he’s got velvet running up the back of the neck for comfort-how cool?).. “Feel the Pain” was awesome, because it was one of the handful of songs I recognized without looking over at the set list which was a foot away from me taped to the stage in large font. You can’t hear any vocals at the spot I’m in, which is how it usually is with me. It’s awesome to be there if your not trying to take videos for YouTube and stuff. I’m trying to write a blog here, I’m so close that the light shows interfere with my pictures as oppose to enhance them, but I got two full song son video “Thumb” and “Freak Scene”(Freak Scene is the song that Dave Grohl copies his guitar riffs from).. all of a sudden I remember there’s other members of this band, and I look over to see Murph kickin it big time on drums-really laying it down. And there’s not enough to be said about Lou’s bass playing-it’s a different kind of sound. Lou plays a sort of alternation of 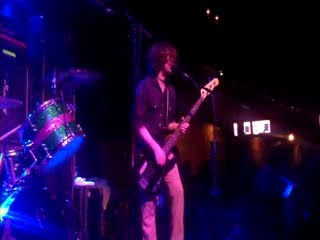 heavily distorted fast chords melded in with utterly decaying lows-blisteringly blissful… He takes queue from both hardcore and punk concurrently… He’s like the bass player version of JM, where it sounds like something, unique-something totally of it’s own.. totally ripping through the traditional basslines you’d expect to hear Song’s like “Forget the Swan” with Lou singing lead and JM soloing underneath make for inexplicable, indescribable type of rock. I want to call it noise but it’s too melodic. Want to call it “grunge” but it’s too fancy, too well played. It’s really something of it’s own. They actually went off with the two aforementioned songs. They played “Freak Scene” and then played “Forget the Swan” and walked off stage. Without even saying goodbye! This was 11:46, and without a goodnight I would think they’d come back out, and here they do, about 5 minutes later. They get into a song, which of course being an encore has exceeded the written set list, so I do not recognize the song. It’s loud, abrasive and awesome and I hope someone can get back to me with the name of that song. Then after that there kinda looking at each other wondering what to play and then someone screams “Just Like Heaven!” and JM looks at Murph and gives him the “fuck it, why not” look and they end an masterful set by covering the Cure, awesome…. 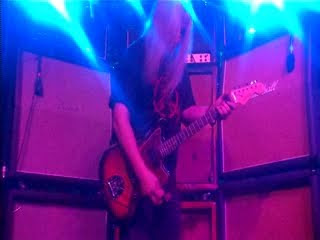 SETLIST: Thumb, In a jar, Budge, Imagination land, Pieces, Plans, Pick me up, Out there, Over it, Feel the Pain, Little fury things, The Wagon, Freak Scene, Forget the Swan….

Keep up on this website there is more soon to come, and make sure you check out my other blogs too and hit me on Facebook and suggest shows I should go to-together we can make music a better place…Late


Jay Porks here.. I used to be a contributor on here. I\'m a little more than that now. This used to be the place I\'d go spill my rants and raves about artists and music I love and loathe. I still do that. But now I host a weekly podcast to get things off my chest, and since I have you here I\'m gonna tell you about it: Used to talk about fun things like music and pop culture, but these days it\'s all flushing the fascist crime syndicate from 1600 Pennsylvania Ave and taking back our country. A hostile foreign nation installed a corrupt racist rapist fake rich criminal to power and now he holds the nuclear codes. We have a lot of work to do to fix this nation and it starts with VOTING. Sometimes we go through the music headlines of the week along with other things I feel strongly about. Like ending Cannabis Prohibition, the sad state of affairs with the tri-state area sports teams, The struggles of an anti-social mess attempting to live in a social media world.