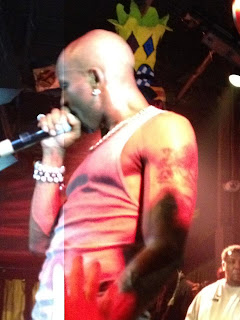 There’s a venue in New York City located at 204 Varick Street called S.O.B.’s that will probably not show up in any more Jay Porks Experiences… We’re here for DMX’s Return To New York City Presented by Ghetto Metal ( Twitter: @ghettometal) tonight. The SOLD OUT S.O.B.’s I should say, as the tickets for this 400 person capacity venue are gone. I remember in High School circa 2000 when I was introduced to DMX in a music class-not by the teacher but by an obnoxious kid sitting back rock with headphones on reciting the lyrics live from I.S. 75. I mean, if you’re going to be screaming lyrics out in class, I think those were the most explicit one’s you could have picked at the time.. The delinquent was booted from class, and I found myself adding another artist to that “Handful of Hip Hop Artists I would go See live” list. So the 65th installment of the Jay Porks Never Ending Concert Series brings back memories of Slaughterhouse last year , at SOB’s, (which at the time I considered) an awesome venue. Just a big room: Bar in the back, a stage that’s literally three steps up from the ground, dinner seating to the left of the stage, and the back stage area being downstairs-which leads the artists to no choice but to come through the crowd to enter. Awesome. I mean, the only way this night can go bad, is if there’s like 40 unnamed openers that perform til midnight. Whatever “Ghetto Metal” means, I’m pretty sure that whatever happens tonight, my buddy Chach (@oneshotchach) gets the blame for dragging me to this one. Doors at 7:30, show is at 9PM.

We get in, go up against the stage next to the the stairs leading up to it. Cool. Good spot. TONS of press here, I mean everywhere I looked someone’s got one of those thousand dollar cameras. I mean the whole shebang-the flash extension thing-a-ma-bobs attached to Nikon’s and Canon’s surrounding this room. For a place with no special press area, I was puzzled. Then Chach informed me of DMX’s interview on Power 105.1 earlier this morning (video above) which I just watched and now totally understand the hype now. 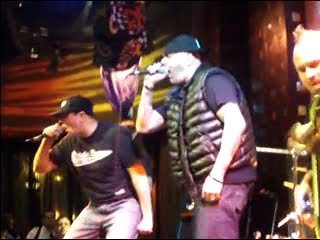 So here’s something unexpected: instruments on stage. Drums and amps set up for, like, a band. Maybe this is the “Ghetto Metal” they’re talking about. And another shocker, show is said to start at 9PM, and a band hit the stage at 8:04. Cool, let’s get this started early, is this ‘Bazaar Royal’? They’re the only opener listed. No it isn’t at all. It’s a band called “Murder League All Stars”. Make fun of the name all you want, but 30 seconds into their first song they were already better then Limp Bizkit-True Story. They had a bassist, guitarist and drummer rocking out while a two man lyrical attack that had the funky rhymes a la Beastie Boys combined with a splash of band like the Deftones. Both guys were rapping, but they were also screaming at heavy volume at times too. Me, Chach, and the photographer chick representing The Source magazine were really digging them…

The next band up, still pre-9pm, was, and forgive me for the botching of the name I was really being pushed out of my spot during this time towards like, behind the DJ rig where I was going to have zero video chances. I think it was “A the Future Featuring A.D.D.”. Back up singers on stage, another guitar player and drummer, along with a violinist, and a female up front singer who’s hot. Then the lead singer/rapper dude comes out in a ‘Misfits’ jacket. They were groovy too, but what the hell is happening here? I’m in the right place right-this is the DMX show? At Hip Hop shows I always feel like I’m out of my field of connoisseurship, but this felt like the norm to me. They played a few quick ones because noted that they were off at 9..

Right during this break they’re setting up another bands gear on stage and we’re wondering if this is like, maybe the back up band for DMX or something, because obviously Bazaar Royal must not be playing, we’ve already seen two bands. It’s at this point I’m beyond the point were I can see the stage, as people who have no concert manners like to shove themselves to the front with little regard to the people who stood outside over an hour and have been standing in this spot for an hour and a half already after coming here straight from a 11-4 waiter shift… People almost got punched tonight, but this when I told Chach I’m gonna stray towards the back for DMX scout a better spot while he snaps shots on his iPhone.

So we wait, and we wait and then at 10 o’clock Bazaar Royal comes on. And if this dude doesn’t even deserve my words but I’ll have them none the less. First let me say that everybody in the band backing Bazaar Royal was tight as freaking hell. They did some cool stuff, a six stringed bassist. Open letter to those musicians: Get away from that guy. Every time you started to nod your head with the band this dude’s obscure voice ruined every song. Not Eddie Vedder ruined, but I really don’t get what he’s trying to do, and I don’t think he does either. Before the last song, chants of D-M-X started, and his repsonse was “Hey! Show some fucking respect! Because I’ll keep you waiting. If you don’t like my music you can find me downstairs or outside..” That’s not exact but it’s the jist. Is he implying that I should fight him if I don’t like his music? First of all, you have no talent. Second off, you have ZERO taste in music and I can tell. The DMX chants started right after him and his band did a cover of Kings of Leon “Use Somebody”. And I’m not talking “hip hop sampled and made a new song out of it” cover-the band played it straight. I should’ve gotten that on video, it would’ve been viral for sure- but I was too busy screaming at the top of my lungs: “Holy F#&king God ARE YOU SERIOUSLY PLAYING KINGS OF LEON RIGHT NOW!?!” repeated to everyone surrounding me. People I know(not by choice), who don’t like Hip Hop even for a second have told me that the perception is that their fans have bad taste in music. Well, when these fans heard Kings Of Leon being covered, the whole building knew it was about time for this dude to bounce. So Bazaar Royale, or Royal or whatever the hell it is . Don’t you EVER disrespect people at a concert for wanting to the headliner. You mentioned how you been with DMX since day one and all that stuff-yet I’ve never heard your name in life dude-and I listen to a lot of music. You have the nerve to step on a soap box (metaphorically) and annoy the hell out of the 400+ people the squeezed into this place. This schmuck didn’t go off til 10:50. 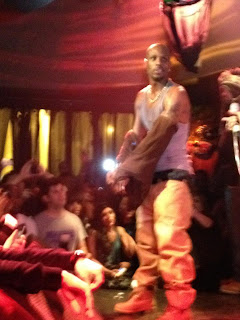 That’s when I high tailed it outside to smoke a cig, and I noticed that if the fire Marshall showed up he’s shut this place down. I can’t even get out the door. Finally did and a dude leaning against the door asked me if I needed any Heroin. What the hell goes on with life?? I got away from him quick and got back in to eventually find a spot on the same side of the room but in the back, I’m probably 20-30 heads back from Chach at this point, and any videos I want to take are blocked by tall people. My arm hurts.

For the last two paragraphs of stuff that annoyed me, this night was a serious win. I mean I was having a great time for those first two bands, and at 11:38 the night go that much better, when there he arose from the basement: DMX! 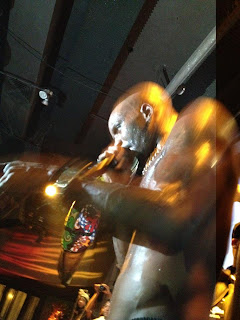 Kicked things off with “One More Road To Cross”.Now this is fun. The whole vibe of this place is shifted. We’re all here looking at the stage and seeing DMX perform for the first time in New York in years. A lot of us first timers, he did nothing short of give SOB’s everything he had. Pulled Swiss Beatz up for a few tracks including “Ruff Ryders anthem” and “Get it on the Floor”. Rumors had it that the Lox and Drag-On were downstairs set to appear, but that didn’t matter. We’re getting the DMX greatest hits set here. As much as my arm hurt from stretching it up for my camera, and as annoyed as I would normally be when people sway their hands in my way-when “Party Up” came on I was glad Chach dragged me to this. “Lord Gimmie A Sign” and “What They Really Want” were crowd pleasers.

Let’s not underestimate the humor of DMX. I mean, he was smiling, cracking jokes, passing around a bottle of Hennesy to the crowd and telling everyone to “Sip and pass”. Also the way he talks, with the growl serving as periods on sentences Awesome. Another phrase that was scream out by DMX throughout the evening “Flesh of my FLESHHHHH” (before he would do a song off of the “Flesh of my Flesh, Blood of my Blood” record). And “It is NOTTT a F#%king GAME!!”. While the set was reaching it’s end I heard people behind me talking. They were chatting between songs and the beat came on for the next one and the dude says to his friend “Wow DMX has SO MANY great songs!”. To quote Ed McMahon “You are correct sir”. The night ended in the darkness when X instructed the house lights be turned off and everyone hold up ligthers and cell phones, and that’s when he ended the evening with “Slippin’” I clocked it at a 12:56AM ending. 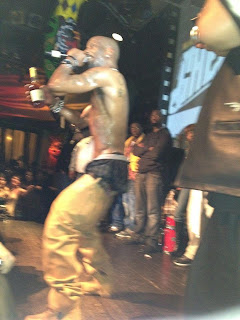 Can’t ask for anymore then that. See, when I went to see Joe Budden at Irving Plaza he rapped like one verse a song and they’d switch the beat up and stuff like we’re listening to the radio or something. DMX came to SOB’s and left it all on stage. He was certainly not just going through the motions. It was a great show.

I’ll hopefully have some more video uploaded before the day’s end, I got some queued up.. thanks for tuning in.