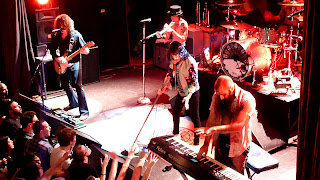 Usually for me, the opening bands at shows are a time for me to get annoyed-quickly. Yet somehow back in February when I saw The Darkness, there was just something about Foxy Shazam. Something about them that made me want to learn more. How long have I been missing out on this? Then, the band headlined there own tour and hit the places like Seattle, and Utah where I was able to read more about the Church of Mother F%#king Rock & Roll. Then, out of no where comes the Bowery Ballroom in NYC, who announce a Foxy show at the cost of, brace yourselves, $17. That my friends is a baptism fee I’m willing to pay. So let’s kick back, and enjoy this little journey out to the Lower East Side, 6 Delancey St, for Foxy Shazam, Doors at 7, show is at 8. And hey, it just wouldn’t feel special if it wasn’t The 69th Edition of The Jay Porks Never Ending Concert Series. Let’s hope for a spot up on the balcony so I can tape. 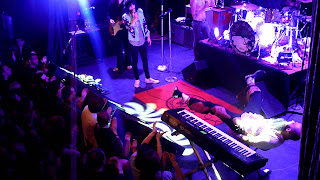 Got to the venue at 6, and I’m no where near the first one here. Seems the high school crowd cut out of their afternoon classes and head to this 16+ event. Usually young girls like garbage, so I’m glad they’re here to be baptized tonight. I grabbed my spot upstairs at a table and saw my two compadres from the line downstairs(who were kind enough to offer me some Mary Jane). So I shouted to them “hey, I got two seats up here”, to which they came up. They bought me a jack and Coke for it. Sweet.

New York Rivals(who I thought were “Rival Schools” ) came on at promptly 8PM. I don’t know how to put this, but I’ll try. They seemed to be way heavier than they needed to. They were loud in a Weezer-esque sense, with the lead singers pants clinging to his legs like Yosemite Sam’s jeans.   Towards the beginning of the set they said they’d be playing Bamboozle. I shouted “who wants to see Bon Jovi?”. This guy belted out wuss tunes over instrumentation that was almost good if it was alone. The one time this dude mentioned the name of the song they were gonna play he was strummed over by his bassist.  They went off at 8:36. 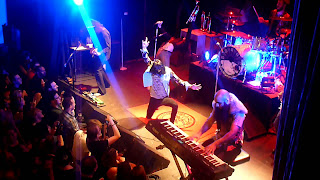 Finally after waiting what felt like forever, the lights go down and ladies and gents, we have FOXY SHAZAM!
The band hit’s the stage at about 9:20 maybe a little before to a resounding ovation as Eric Sean Nally grabs the mic and screams “ I FEEL LIKE A CHOCOLATE BAR!” as they opened up with “ Welcome to The Church of Rock and Roll” (while he pointed out some dude’s Cincinnati Reds hat) and “Holy Touch”. Two things I notice at the same time: One, the whole set is getting taped. I got my arm resting on the railing and all that, and I’ve got a bird’s eye view of the only event staffer in sight. Second thing was how hard is it to keep a camera on Eric. To the regular fan, everyone knows his on stage antics do not include standing still. My wrists got a work out with my lens dancing with him all night. He’s like Iggy Pop minus the blood and Peanut Butter. 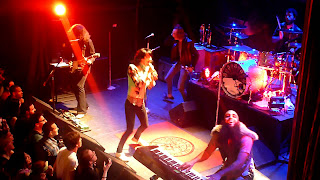 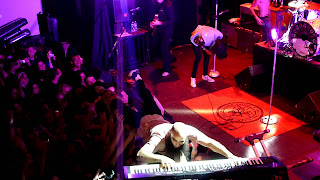 I was once told there was no such thing as a ‘Happy Panda’. Well, take a look at the keyboardist Schuyler Vaughn White for a few minutes and tell me that’s not one happy panda right there. The beard that’s a grizzly Adams-ZZ Top hybrid brushing the heads of fans in the crowd repeatedly while smiling for pictures (even looked up at us once),

before and after he floated his

keyboard out on the audience from time to time. When I first saw them I thought it was one of those stupid hydrolic set ups but then I realized this dude is just bad ass and he lifts it every which way / direction that is imaginable. He stands on it, stomps, lays sideways on it. Then for the unimaginable, him and the keyboard set sail into the crowd. Crowd surfing playing keys. Are you kidding me right now? 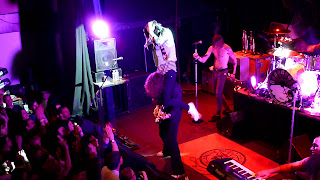 Songs like “Oh Lord” and “Unstoppable” were crowd pleasers mid-set. Eric at one point said “Nowadays music really sucks. It feels good to say that. You should say it as much as you can” I shouted “I try! I try!”. If we’re gonna get into crowd pleasers than we have to address my personal highlight, and that’s when they played “I Like It”. I flipped out simply because, come on, when else does a white dude like me get to verbally express his enjoyment of big black asses? I got to shout “That’s the biggest Black Ass I’ve ever seen and I like it! I like it!” out loud and not get punched. 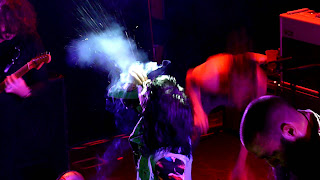 During the duration of the set, I had a cigarette placed on the table in front of me ready to throw on queue. One of the dudes I was up there with kept telling me “throw it!”. I kept putting it off, I didn’t want to interrupt any of the funny speeches. Then finally, before the last song, he ends his soliloquy with “and the man asked: does anyone have a cigarette ?”. Hell yeah I do! I tossed it down on stage left handed and it landed behind him. He already had a full pack of Newport in his hand, but he’s looking around on stage and grabbing all he sees, including mine! We were screaming, probably hear us in the video(don’t leave me comments about it). Then he lit what had to be 5 or 6 at once in his mouth and puffed before turning them around and sticking them down his throat. Eric ate my cigarette! Unreal. 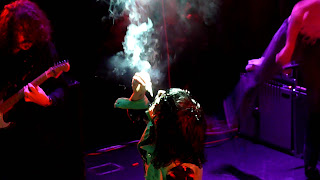 By nights end, Eric was asking if we liked his jacket (which I made a mental note of how cool it was when they first came out), then informed us: “I know Rock & Roll is dead.. But that doesn’t mean we can’t dance with it’s fucking ghost!” and that’s when it was time for “The Only Way To My Heart”-basically the song that got me hooked on Foxy the first time, is now serving as a merely the cherry atop of some of the best cake I’ve ever had.

So for those keeping score, end of the show was “The Only Way To My Heart”, then “Temple”, then the “drunken guy” soliloquy in the middle of Temple, followed by eating cigarettes while dragging out the end of Temple. With the keyboardist on the floor of the stage collapsed with his rig laying on top of him, the band made their way off stage as Eirc grabbed the mic to leave us with one final message: “If I was able to get into people’s minds and make them decide things it would be easy to be the biggest band in the world” as he slams the mic down and the house music hits.

My name is Jay Porks, and I went to attend sermon at the Church of Rock & Roll and have been baptized. 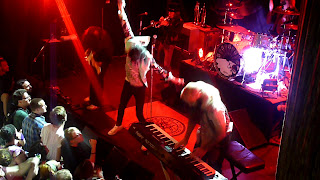 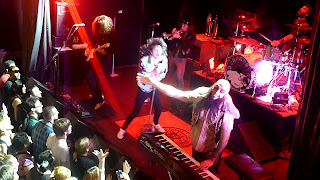 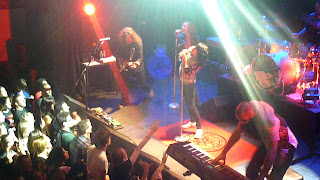 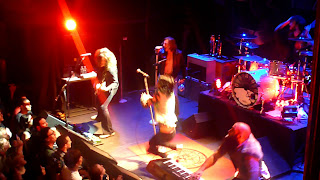 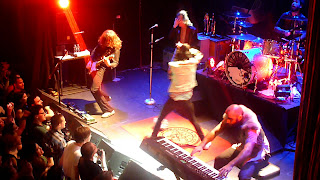 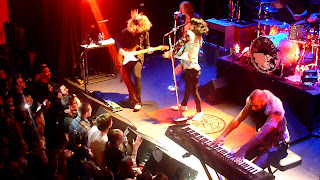 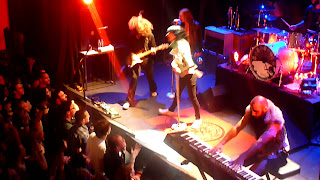 Watch Highlights of Phish Performing at Bonnaroo in 2009

Best Coast Play ‘The Only Place’ On Letterman