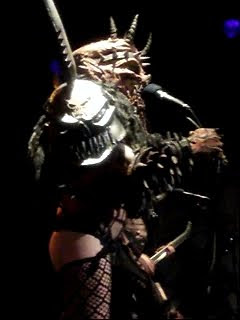 Years ago I remember I had the Beavis and Butthead video game for Sega Genesis. Played it for months on end, but I could never beat the game. In the game the boys are out on all kinds of adventures in hopes to be able to snag tickets to the GWAR concert. Well folks, tonight I beat the game as I have finally made it to said GWAR concert! We embark on a trip to Williamsburg for the 42nd edition of the Jay Porks Never Ending Concert series with intentions of being destroyed by the timeless metal gods that are GWAR at the Music Hall of Williamsburg. The best part is some friends from Concert Confessions helped me get in the door. And another added caviot to tonights events, I’m here with Lex from LastRemains.Net, who is also probably the only chick I know into metal. Doors open at 6:30 and the show is at 7:30, all seems to be set for an awesome night.. 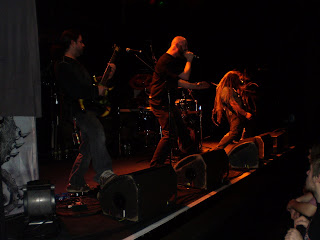 Mensrea went on almost 7:30 on the dot- I had to run to the bar downstairs to beat happy hour 5 dollar Heineken, which ends when the opening band starts..Coming back up and looking out into the crowd- You gotta love the mosh pits starting this early-these people are devoted to that shit.. Mensrea belted out tunes well deserving of those pits; they were HEAVY. Plus, the bass player had some epic dreads going on- I envy those locks. The lead singer, sporting a bald head( how do you headbang with no hair without getting a massive headache?) and a long goat tee screaming lyrics to each song with that look on his face.. The look like he would enjoy beating the crap outta everyone in the room.. They rocked it until 8:15 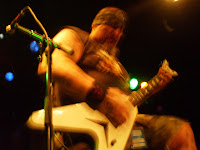 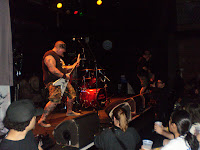 Mobile Death Camp had the stage set up at 8:30 on the dot.. Went on a few minutes after that.. For three dudes these guys are know how to shake a building.. I made my way down to try out my photo pass, and for the first time ever it was successful! There I am-IN FRONT of the guardrail I usually am stuck behind and I’m snapping shots from inches away from the band without having to show up 5 hours before the show to nail a spot down front. Sweet. They played a song called “Negative Minds” before they went off at 9:15.. pretty cool band.

Smoking a cig before GWAR hit the stage- the line outside has more people on it than people that were inside.. Shit is about to get hectic up in this mofo. When I came back in and saw the monitors on stage being wrapped up in garbage bags. Okay then, so I guess hectic is gonna end up being a severe understatement. 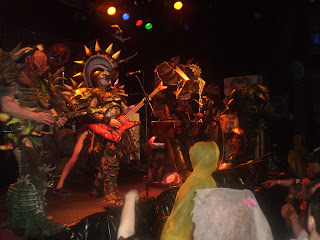 Made my way back in and headed right down in front leaning myself on those garbage bag coated monitors ready to start snapping shots. I look to the left, and look to the right and I noticed I was the only one in the photo pit not wearing a poncho-should’ve taken that as a sign. As soon as GWAR hit the stage around 9:45, two ‘slaves’ came out and started shooting fake blood at everyone in attendance as the set kicked off with the scumdogs of the universe destroying us all chord by chord. My white hat was removed swiftly by a stream of fluid and I almost slipped and fell as I put my ( now red) hat back on I could 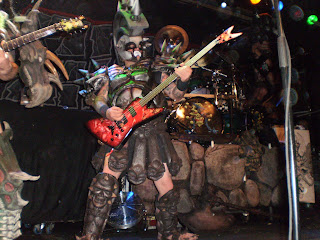 feel the room shaking as the crowd standing behind me went into a frenzy-forget that; it was way beyond a frenzy. There was so much going on down there in the photo pit- while trying to snap shots and making best attempts to avoid additional moisture; the next thing you know we were a few songs in and already being told it’s time to recede back into the crowd. Fair enough, me and Lex are taking turns holding our spot up a few steps along the left side of the room against a railing. Event staff came over to tell me not to take any video-which by the way I wasn’t taking at said time. I was too busy taking it all in- all the chaos that was going down on stage. The drums mounted high above a set of (pretend) boulders, a half the band barley wearing pants, 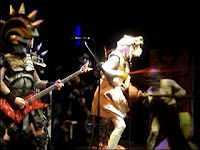 the pretend Lady Gaga that came out with a toilet strapped around the waist(signifying the garbage she is) with blood streaming from her titties and feces coming out of her face. It was even entertaining when the music wasn’t playing and they were cracking jokes about Lara Logan, the CBS reporter that from what I’m told was slightly fondled during the celebrations in Egypt(for anyone else it would be “too soon”, but not GWAR because they’ll destroy you). Then this one dude climbed in front of me and stood up tall on the railing and took a dive right into the crowd escaping the grasps of event staffers-if only 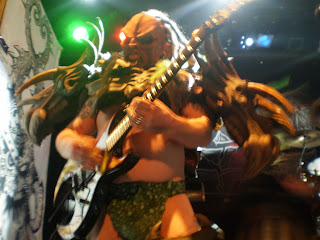 someone in the crowd who have had a grasped of this dude as I watched him plummet into a sea of people and disappear. As loud as the music was , that was one thud that I heard loud and clear. Slaves running around the stage with more streams of fluid shooting at us, and just when I thought being on the far side was an escape I felt the stream smack me in the face-by the looks of the stains on my pants they were also shooting a blue liquid of some sort. Myself, both cameras are drenched as characters on stage have their insides ripped out and spew blood all over us ( these guys must have an additional tour bus that just holds tanks of this fake blood-there was so much). 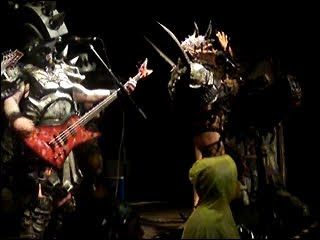 that surfed their way to the front of the crowd that they’re not near me, meaning it’s time to hit record and go all Michael Moore in this bitch-I got a full recording of “Sick of You”, which was their last song of the evening. The lights came back on, everyone drenched as the house speakers begin to play the Bee Gees- to which we all did what we had to do-we started dancing. I looked at my phone and it was 11:15, and we ain’t gotta go home but we gotta get the hell up outta here.

So there you have it-scorched by the metal gods that are GWAR. I had in no way imagined it 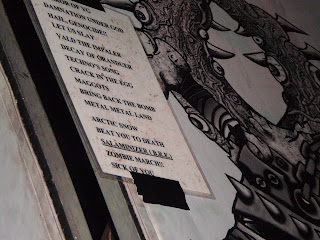 would be that much fun. When you go into a show only familiar with a song or so from a band you don’t think you’ll get much out of it. Well I got way more than I bargained for here. Without a doubt it would have been worth the $25 ticket price, and I am very grateful for the chance to cover these trail blazing residents of Antartica. I can seriously get used to this ‘press pass’ thing.

Well if you made it through this; through all my nightly tweets, Facebook mobile updates and by scripture length show review- then you understand why it is vital that before I post this I must jump into a quick shower as I look down at my bloodstained hands in amazement. So anyway, thank you all for participating and I’ll catch you all April 13th for Chris Cornell- but for now here’s hoping we can get a blurb in the Brooklyn Vegan or something; goodnight everybody!!http://www.youtube.com/watch?v=DXrJ0Kw6d_Y&feature=player_embedded