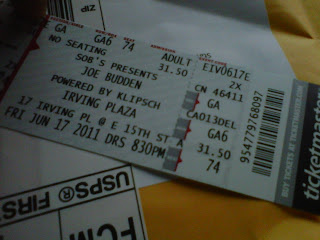 I always wondered what it would be like when I saw that show I was extremely unfulfilled with. I’ve never left a show thinking “I’m gonna trash the sh*t out of this thing”.. Well, let me try not to give away the ending here as the 49th edition of the Jay Porks Never Ending concert series is sort of a continuation from where we left off last time. A few weeks ago we endured Slaughterhouse (Joe Budden, Joell Ortiz, Royce Da 5’9”, Crooked I) at SOB’s in the city. Tonight is the alleged main event, as Joe Budden headlines Irving Plaza in Union Square. We came to these tickets like this, have you ever tried to set yourself up for a good birthday present? Well, that’s what I tried to do as this was my representation for my friend Chach’s birthday present, in hopes that when December rolls around they’ll be some awesome show I’ll get bought in to. And as previously mentioned here, Joe Budden’s music and the ears of Jay Porks usually get along very well.

Before we left for the city, I had tweeted something like “never been so unenthusiastic headed to a show before” and tagged Joe Budden in it, not thinking anything of it. What happened after that is completely out of my hands as sh*t got real and all of a sudden I had a way more powerful voice that I thought I did. So Joe Budden decides to tweet back at me, asking me why I paid for tickets if I’m not enthused. Here’s the back and forth via twitter:

-Jay Porks: me and @oneshotchach headed out to this @JoeBudden show with LOW 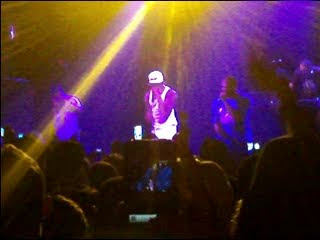 expectations… I don’t remember being this unenthusiastic for a show b4.

-JoeBudden: @JayPorks then y exactly are yall paying to come ?

-Jay Porks: @JoeBudden It’s this little thing fans do. You know, where they like your music and come out to show support…

-Jay Porks: @JoeBudden 2night’s the 1st time I get the exclusive Joe showcase.. was at SOB’s a few weeks ago. I wrote this: tinyurl.com/5tcj4wp

-Joe Budden: @JayPorks I read that b4.. All of it leads me to ask.. Y so unenthused about tonight ?

-Jay Porks: @JoeBudden If I had more than 140 characters, I’d have added “unenthusiastic due to in-climate weather and a trek from Staten”

First of all I’d like to thank Joe for walking directly into my trap by being so annoyed by my lack of enthusiasm he felt the need to Re-tweet(RT) it to all of his almost 296,000 followers. And I owe dude another thank you, as it was the perfect lead in to link him up to the review I wrote of the Slaughterhouse show. And of course the key line in all of this being “I read that b4”, now that is awesome-an admitted fan of my work… By the time all this is going down I still haven’t left my house, I’m up like 10 Twitter followers-the ‘mentions’ are out of control. NOW this night just got interesting. Too bad this would be the peak of this evenings surprises. 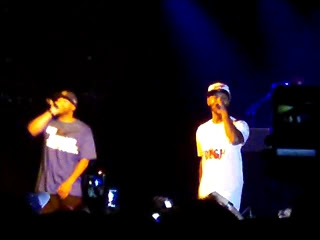 Me and Chach aren’t pulling any punches-we showed up after 9 (doors opened at 8:30).. last Hip Hop show I attended I sat through 27 opening acts before my headliner did a whole 40 minutes give or take; was not taking that chance this time. I’ve heard stories about (and could’ve sworn I read tweets directly from the horses mouth about) three hour Joe Budden sets. Which I wouldn’t mind-just would like to skip the additional 2 hours of standing before that. Irving Plaza, much like a lot of these NYC venues, if you’re not one of the first 15 people on the line and you don’t get a spot up against the stage-your standing place is going to suck balls anyway if you’re under 6 foot 2, so why rush there in the rain. And besides if doors don’t open til 8:30, I don’t expect to see this dude hit the stage pre-10:30.

Like I said it was after 9 when we walked in, and there on stage is a funny dude known as “Low Key” (Twitter @LowKeyUHTN) who is serving as the MC for the evening before the acts hit the stage. They’re spinning records, getting the crowd pumped and all that. It feels like a “club” in here, and it’s PACKED. People are already out the doors into the hallways packing into every inch of this place. The most full I’ve ever seen a place that wasn’t listed as “Sold Out” . And wait a second, there is an opener who is yet to go on stage, his name is Drue Hudson (I was calling him Dru Holiday all night, but Chach had to inform me I was thinking of a basketball player). Anyway he came on and played from 10PM to 10:10PM.. not a typo, that’s ten minutes and promptly after that Low Key handed off the mic to someone who said he was going to be our MC for the remainder of the evening, his name is “Killa BH” of “Is it the Shoes?” fame.. Joe Budden walked onto the stage at about 10:20, maybe a tad after, and jumped right into things with a song called “Real Estate” followed by a TEASE of a song called “Walk With Me” off his only major label release. What I mean by tease, is that the beat was played, everyone got excited and then as soon as it was time for the lyrics to kick it they flipped to another song immediately. There were a lot of times tonight I felt as if I was listening to HOT97 or something the way a beat would be teased only to not hear the song. How is that gratifying at all? And throughout the night the same “time killing” non sense would go down as it did at SOB’s a few weeks ago. We have fans being invited up on stage to see if they can rap the verses from a random Joe Budden song they throw on. First fan killed it on a song called “Calm Down”, completely nailed it. He won himself a free “Joe Budden related” tattoo from Joe’s personal tattoo artist. But that sucks, because that’s one of my favorites and another from that first(only) record that we’re now obviously not going to experience for real tonight. And not to say there weren’t full songs played(or almost full), because there were like: “Downfall”, “Side Tracked”, “Black Cloud” and inbetween there his biggest hit to date “Pump it up” was played about mid way through the set. 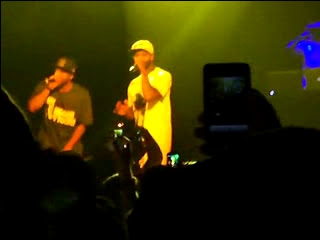 Am I missing something here? Think about this for a second, the artist I’m here to see has ONE album that you can buy in a store-the rest of his work has come on mixtapes. I mean, Pump it Up is not one of my favorites at all, but it’s his highest charting single, I would think that you save that song for close to the end, no? I know artists don’t like to be defined by one song, or one album of their career-but with such scarce depth of songs to reach too,don’t you think you should spend, I don’t know, maybe 20 minutes of this set and run though some of that for us really quick? Maybe play “Stand Up Nucca”, “Calm Down” or even “10 Minutes”-just to bring the night full circle you know. Promote all the new material too, but damn man I’d kill for a classic right now as I hear you accapella your verse from “Microphone” or a piece of “Never Sober Up”.. And as the night moves on, I keep hearing Joe say how “We’re pressed for time here tonight”… WHAT? It’s Friday night in New York City at a real deal concert venue and we’re already hinting about an early exit? At least add some commentary to that like “the VENUE is giving us a ceiling on time” or something. Especially when I’ve seen plenty of bands like Mudhoney and the Meat Puppets play into the 1AM hour and we’re dropping curfew hints at 11:23? This is making me feel like Esther Baxter isn’t the only one with the “So what? attitude/coming off arrogant” to quote a line from “Ordinary Love Shit Part 3”, which was actually one of tonight’s highlights. 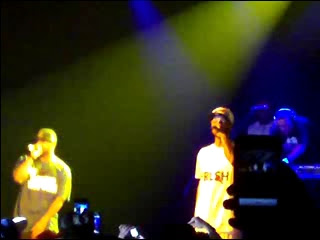 Coming up on midnight closing this set down, Emanny was brought out to do a song called “Dreamers” as me and Chach decided it was time to see if we can catch that 12:30 ferry(which we didn’t) and got the hell out of there. So after being interrogated over Twitter and in not so many words being dared not to be blown away by this show-I walk away unblown, and my back is freaking killing me. I mean I’ve been to over 50 concerts, if any artists I’m going to see need tips on how to make a set list out or something, just send me over an email I’m always here to help. Had more fun at SOB’s than I did at this show-more intimate, more interesting, more energized…They say don’t knock it til you try it, well….Knock Knock.