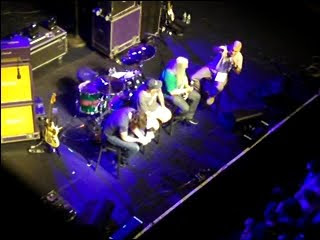 The 50th installment of the Jay Porks Never Ending Concert Series takes us back to the famed Terminal 5 (610 West 56th street 11th ave in NYC) to see a special Dinosaur Jr show tonight.. Well of course all Dinosaur Jr shows are special, but the band isn’t really on a tour right now-they’re playing a handful of dates, one of them happens to be tonight.. opening bands are ‘Fucked Up’ and ‘OFF!’ (a new Keith Morris outfit) along with another added treat as according to Brooklyn Vegan, Henry Rollins will be interviewing Dinosaur Jr live on stage. I’ve seen Dinosaur Jr twice before, once here on a bill with the Meat Puppets and Built to Spill and a crazy set at the Brooklyn Bowl that left me deafened..Been a while since I was this excited for a show.. anyway, the plan is to head straight out to the venue after a 4 o clock exit from the day job, with hopes of getting there around 6 and being on of the first few people on line-I need that spot along the railing on the third floor I had for PJ Harvey.. that spot was insane. Place is huge (capacity 3000+), so fingers crossed as we head out for the latest Jay Porks Experience..

So I showed up early enough where the doors were open but technically not open, as all of us who are here pre-6:30 are being shuffled up flights of steps to the roof top smoke deck thing to await the official 6:30 doors. “Early doors” is what they’re calling that, I call it: “Instead of these kids flooding the street, lets flood them towards somewhere we can sell stuff”… So at about 635 event staffers begin to wave us in. As people dart passed me(one girl even busted her ass on the steps) racing for their lives to get down near the stage, I calmly walk myself over to the spot I’ve been dreaming of for weeks…and I got it. Third floor , left side along the railing WITH an ottoman pulled up that I’ll sit on until this show gets on the road and inbetween sets. Look at all those schmucks down there squeezing in to try and get really really close..it’s Dinosaur Jr for christ sake, I’m going to be deaf from up here on the top floor.. so have fun hearing for the next month….saw a sign behind the bar that said “OFF!” goes on at 7:30, Fucked Up at 8:30, Henry Rollins will interview at 9:30, and Dinosaur Jr will go on at 10 playing ‘Bug’ in its entirety, hopefully along with some other hits..

Quick random question: playing “Bug” in it’s entirety, why is the backdrop of the stage a picture of their latest album” Farm”? Maybe they’re just going with that as the default thing.. As 7 rolls around I start to wonder how this interview is gonna go down, doesn’t look like they left much room on stage.. 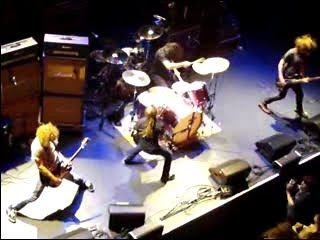 “OFF!” is Keith Morris’s latest vehicle (Circle Jerks/Black Flag)., and sticking with these speedy hardcore punk roots, OFF! has a set list 3 pages long, and they are running through songs at a ferocious pace. .. Like I wonder if any of these clock in over a minute.. Did anyone tell Keith that the dreads with the receding hairline is not a great look..he looks like a hobo I’d see on the train.. 56 years old and still gives off that angry at life with his music-I envy that…. There’s a whole area of the floor section circled off with slam dancers… Jesus they are getting rowdy down there… They went off at 7:57.. Thanked us for coming out early repeated, and for all we know ran through 37 songs in the last 25 minutes. Awesome.

“Fucked Up” hails from Toronto, and they’ve been much the buzz every time they come to 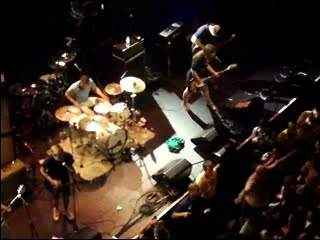 town.. plus, a former professor of mine Brian Cogan (Who’s book you can purchase here ) says that Fucked Up is a “brilliant band with a great sense for the absurd”.. Well, I consider myself a fan of the absurd, but only NOW I get the full meaning of the word.. Fucked Up gave us a three guitar onslaught of heavy riffs topped off with a gigantic jolly front man who isn’t afraid to take his shirt off..first song in he’s in the crowd.. he’s screaming these lyrics as the microphone cord is like endless feet long so this dude just walks through the crowd hugging members of the pit..And it’s not like he got back on stage any time soon…the bass player is a chick,which always peaks interest of mine.. Nice little bass player cleavage… This band is pretty odd..and pretty cool.. Over thick, raspy screamed lyrics the other members of the band provide a little vocal harmony… it’s like a lot of these acts labeled “hardcore punk”.. it’s an interesting sound if there wasn’t all the screaming.. still a band I’d recommend.. I guess this is how they do things in Toronto, eh?

So I need to bring this up, and I really don’t care if this person reads it or not ( every time I mention a random fan in a blog they find me).. In-between Fucked Up and Dino, there was this girl who tapped me on the shoulder and said “excuse me, can I like sit on the floor in front of you.. like down there?(pointing to the spot) You can kick me if you want.”.. First off, I’ve been here in this same spot since 630, now you wanna come and sit in front of me so you can see? I got up for work today at 9AM, came straight from there in my dorky white button down shirt and took a bus to a train to a ferry to a train and walked 10 blocks just to get THIS spot. I would love if you didn’t come and try and Bogart that .. How bout you get here early enough to grab some prime real estate?.. Furthermore, let me get all male chauvinist pig here(I am Porks after all) for a second- Note to ANY girls in the future who want to tap me on the shoulder and ask me for something at a show, you better have something to bring to the table.. A make out at least.. something! Don’t use that “I’m a girl” bullshit to get whatever you want, this isn’t the 40’s anymore- we’re all equal here.. That said, my reply to her was “Do what you want”.. 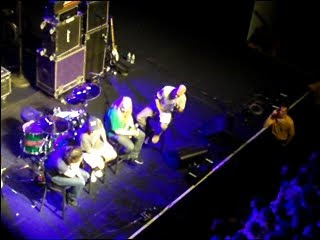 Safe to say I went hoping Rollins can squeeze in a few minutes of his humorous spoken word stuff that I missed out on March 2010..So about 9:30 they set up four chairs on stage as we wait for this interview to go down.. About 9:45, Henry Rollins came out to a resounding ovation-now all of a sudden this place is packed..

We were all set up when the interview ended, so the band headed off to return in a few minutes- and at around 10:15 they hit the stage.. J Mascis says playing “Bug” straight through the last few nights was “a little weird”, so they kicked off the set with “In A Jar” and “Off the Wagon”.. Absolutely electric-and not just due to the fact they’re plugged in. For the first time ever, I’m getting to hear JM’s vocals; previous two times I saw them I was inches away and I couldn’t hear a damn thing, I figured it was customary for them with the noise they make..place me a good two floors up it’s all sounding so crystal clear to me now- this is incredible.. 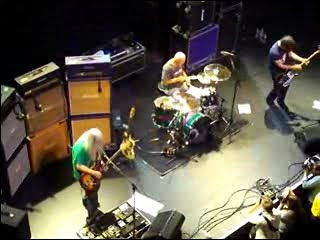 “Freak Scene” and the rest of the tunes as we got through “Bug” put some insane guitar work on display by our platinum haired compadre downstairs.. His pedal board looks like something out of Star Trek, colors and buttons everywhere.. And a light show, who knew? Green and purple beams bounce off the walls and crowd.. And as I look around I think to myself: ” I was lucky enough to accidentally be introduced to Dino Jr a few years back that’s how I know them…. how are all these 17 year old kids chapter and verse on a record that came out in 1988?” The first song of the encore I didn’t recognize, but the room did.. I taped it I’ll find out..

Towards the end of the set songs got more and more intense.. For the last song on the album 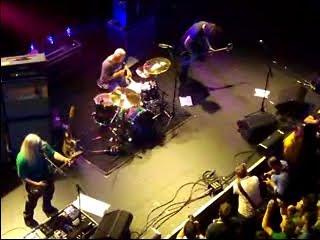 “Don’t”, We had a guest screamer on the mic.. See, bassist Lou Barlow blew his voice box out while cutting the track for the album- and he says he did the same first night of this tour, so they enlisted a fan (With a stellar afro) to come up and sing it..it clocked over ten minutes as it was about 11:15 when they went off for the encore..

They came back out a few minutes later and played a song before “Feel the Pain” started playing and my camera was tapped out of battery.. so I started to head closer to an exit, maybe check some other views of the room to finish off this set.. It’s gonna take me 4 songs to get outta this place anyway… 1st floor was terrible, as on stage Dino invited the lead singer of “Fucked Up” out to help them finish off the last song of the evening-which wasn’t “Just Like 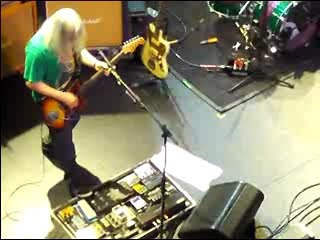 Heaven”, much to my chagrin…

Love to get my money’s worth, especially on our 50th installment.. fun night, plus that fact that I caught all the trains and boats with good timing on the way home, so I can queue up all this video to upload tonight… Sweet times… Thanks for hanging out for a few, and stay tuned..