Tag: Florence and the Machine

Florence and the Machine stopped by Jimmy Fallon last night. The band  played two songs. One called “Spectrum (Say My Name)” with  full orchestra included. Then  Florence Welch(minus the machine) joined Jimmy for a song called  “Balls In Your Mouth”, it’s a BP “protest song”. Watch the videos for both performances below.

Balls In Your Mouth

The reasons to visit Mexico once in your life are endless. Those of us who have actually have  Autumn and Winter (we speak not of Reverend Justito, who lives in a place that doesn’t know what weather is), would love to escape it. Why not take a weekend and spend a few Peso’s on some cheap blow and  easily accessible sedatives while spending your evenings taking body shots of tequila off sexy senorita’s, chasing it with Dos Equis alongside the Most Interesting Man In The World. Yes, I’m thirsty my friends.

All kidding (or what we’ll call kidding to save face) aside, The Corona Capital Music Festival can be added to the list of reasons to visit. You can add the likes of  The Black Keys, My Morning Jacket, Florence And the Machine will all be in Mexico City October 13th and 14th, along with a returning New Order, James Murphy (of LCD Soundsystem) and Sleigh Bells mixed in there as well. Hell, even the Wallflowers are on the bill.

For the full list of acts that you can’t read because the poster is weird, we got a list for you below:

Florence and the Machine

Pearl Jam And The Foo Fighters Headline Yet Another Festival

Pearl Jam And The Foo Fighters Headline YET Another Festival

So, in a week where “Bands Jay Porks Hates” is the Lunchtime Jam of the Day theme it’s just fitting that a festival with this line up would be announced.

There are so many things I’d rather be doing right now then reporting on yet another festival headlined by Pearl Jam and The Foo Fighters. Cutting myself, putting my mouth on the exhaust of a parked car and voting Republican top the list, but you know what they say you can’t bake bread without yeast right? Well, here’s a yeast infection for you.

Pearl Jam and the Foo Fighters will headline the newly revived “Music Midtown” Festival in Atlanta this September 21st and 22nd. Other guests will be “Girl Talk” (Wow, Girl Talk is playing a Festival set?!? I’m so shocked),The Avett Brothers, Florence and the Machine,T.I. Ludacris, Joan Jett and the Blackhearts, O’Brother and LP.

All the ticketing details are on at the festivals official website at MusicMidtown.Com

Florence and the Machine Live at the Cosmopolitan Las Vegas 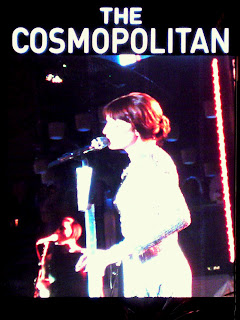 Florence Welch of Florence and the Machine has certainly enjoyed a whirlwind of success in her early career. Florence gained quick recognition on the 2008 festival circuit from fans and critics alike, even catching the BBC’s eye at SXSW, consequently landing a spot BBC Introducing in September 2008. Florence was even nominated for the 2009 Mercury Music Prize, an honorary award for new UK artists, before the release of her debut album Lungs. As a fan, I too was just as eager to praise her name, “Dare I say, watch out Tori Amos, I believe Florence and the Machine is bound to take your throne…” @dotshiva 11Jun2009

On April 18, 2010 I got my first chance to see Florence and the Machine live at Coachella, however due to the massive crowd with the same idea and me being vertically challenged, I never actually saw her. Needless to say, when I found out she would stop in Las Vegas between her 2012 Coachella shows, I knew this was my best chance to finally be satisfied. Florence’s popularity again won, completely selling out the show weeks in advance. Bless my lucky stars, somehow the heavens aligned and granted my wish to see Florence and the Machine. 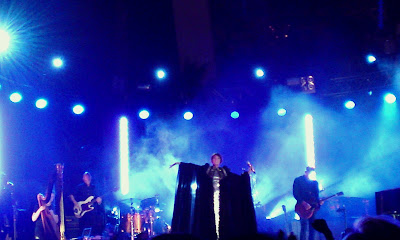 Entering the stage just as angelically as I could have imagined, draped in a heavy, almost royal robe, Florence slowly broke the silence with her radiating voice. As she sang, Florence moved with such emotion and energy, it was as if she was singing and acting out each verse to the gods watching above us. During What the Water Gave Me, she threw off her dark cape to reveal a stunning silver sequined gown that shimmered gold in the light.

Florence continued through her incredible performance standing tall and as brilliant as an Emmy. Backed by an equally talented backup singer, harp player, and five other band members, the music perfectly reflected her voice’s grace and intensity. The setlist and performance of songs was like floating on ocean waves; peaceful, beautiful, mixed with both ferocity and a soothing calm. 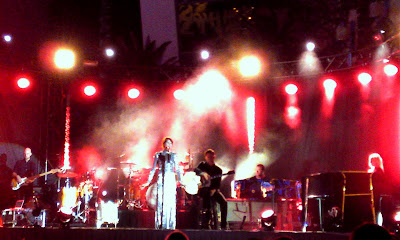 Keeping a lighthearted attitude alive after performing emotional songs was the key to her hold on the audience. Before playing Rabbit Heart, Florence encouraged all men to raise it up, “Put your girl on your shoulders and raise her up!” She also encouraged everyone to start jumping in sync to start Dog Days Are Over. Whether she got the crowd going or held us hypnotized in her voice, Florence and the Machine knocked her audience dead with exquisitely poetic song and dance.

Near the last song, Florence gazed over the audience to view the neon glow of the Las Vegas strip beyond and exclaimed, “This is definitely the most beautiful place we’ve ever played!” She laughed and continued, “Vegas is the best place for a nervous breakdown… it’s amazing; so beautiful… You should go there!” I can only hope this means she will be back sooner rather than later. Florence and the Machine truly put on a world class performance that those in attendance will not soon forget.

SETLIST: Only If For A Night, What the Water Gave Me, Cosmic Love, Rabbit Heart (Raise It Up), Breaking Down, Heartlines, Leave My Body, Lover to Lover, Shake It Out, Dog Days Are Over, Never Let Me Go
Encore: You’ve Got the Love, No Light, No Light

According to the Chicago Sun Times,  we officially have a list of the performers that will take the stage for Lollapalooza 2012.

After cancelling numerous tour dates earlier this year due to illness of Tony Iommi, Black Sabbath will headline the festival that takes place in Chicago August 3rd-5th alongside Jack White, Red Hot Chili Peppers, and The Black Keys.

Don’t worry folks, everybody’s favorite reunited band At The Drive In will be there too, along with Avicii, Florence and The Machine, Justice and The Shins.  And I guess it wouldn’t be a festival if Childish Gambino wasn’t involved.

The line-up listed below is courtesy of the Chicago Sun Times website,  and you can buy your tickets at the official Lollapalooza Website

-The Head & the Heart

-The Tallest Man on Earth

-Of Monsters and Men

-The War on Drugs

-Walk Off the Earth

The lineup for the 2012 Reading and Leeds Festivals have been announced and as always they are mighty impressive. Headliners include Kasabian, Foo Fighters and The Cure. Other notable acts include At The Drive-In, Paramore and The Black Keys. As of press time, the website for Leeds Festival has crashed from all the heavy traffic, but you can check out the lineup for the Reading Festival below.

For additional information on the Reading Festival – click here.

Every year, something glorious happens on the legendary Beale Street in Memphis, Tennessee. That glorious happening is Beale Street music festival, an affordable way to spend the first weekend of May. Like heavy metal? Like alternative rock? Like pop music? Like rap? Like country? Almost every existing genre of music is represented at Beale St., thus making it that much more appealing to a music fan.

See the lineup broken down by day and stage on the website: by clicking here.

Kasabian, Refused, At The Drive-In and Dr. Dre & Snoop Dogg – oh my. The 2012 Coachella lineup is out and it’s epic like elephant titties. Tickets go on sale Friday January 13th 2012 at 10 am PST via coachella.com

Both weekends of Coachella 2012 sold out in less than three hours. Our man Reverend Justito has purchased tickets for the first weekend. If you are heading out to Indio, leave us a comment. Maybe he will buy you a beer.

So while concertconfessions mastermind/general pop off and wannabe cult leader Reverend Justito! didn’t make it out to Coachella, my co-worker Christina did.  She was kind enough to let me share some of her photos here.  We hope you enjoy.