So it seems we’ve run out of creative names for festivals, but it doesn’t hurt to have an almost endless line up. That seems to be the case with UR1 Festival , which takes place in  December 8th and 9th a Bayfront Park in Miami. Headliners include the likes of Kim Kadashian’s newest squeeze Kanye West, The Offspring, and that guy who ruined Metallica, Lou Reed.

Of course we kid about Lou Reed ruining Metallica (Metallica ruined Metallica this year). The rest of this line up rounds out pretty awesome with appearances from Slash(who split an awesome bill with Foxy Shazam this fall), fun.,  those weirdos Animal Collective, Flying Lotus, space rockers Ghostland Observatory along with Janes Addiction.

For up to the minute festival details, head over to the official website by clicking here. For the full line up, plus festival trailer, that’s all down below.

UR1 Festival Line Up 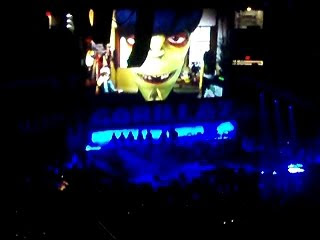 Purchasing these tickets on Tuesday night for a Friday night show, I didn’t expect premium seating.. Didn’t need it at all.. What goes on people, thanks for stopping by and hoping on board the 38th Jay Porks Never Ending Concert Series which takes us back to the Mecca- Madsion Square Garden, for NY’s taste of the Escape From Plastic Beach Tour with Gorillaz! Show is set to kick off at 8PM with N.E.R.D. billed as the opener.. This should definitely be interesting. I love cartoons and I love music by Gorillaz- so combining the two elements should be exquisite..

A few differences from when I was here last week for Alice In Chains- the floor pit section has seats as oppose to standing room. Also, I wasn’t routed to another section upon arrival- sat in the seat listed on my ticket: Section 401.

N.E.R.D hit the stage a minute or two after 8PM.. Looks like visual effects will be tonight’s theme- for an opener N.E.R.D had some light show going.. Three mini screens on the stage… Two hot chicks table dancing on each side of the stage- nice. I see two drummers with a dude on 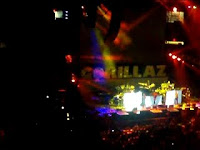 multiple keyboards in between them.. Guitar and bass player too- going with the full band. I appreciate “Hip Hop” ( if we wanna call this that) when a live band accompanies it. Makes it seems more, I don’t know for lack of a better term, more real. Because truth is, if you play ME a beat I could rhythm to it, alot of people can. But ten minutes in I’m enjoying this- not even that “good for the opener” enjoyment- I legitimately like this.. Pharell says “since we’re in the greatest city in the world where people know music, we’re playing some new N.E.R.D.” they then got into a song called ” I’ve seen the light”.. As the set progressed I got more and more impressed.. Here’s the thing about us New Yorkers- most neighborhoods are ethnic ones, so we all learn to appreciate hip hop on one form or another- and when they closed out the set with “Lapdance”, I was officially into it.. Seriously.. N.E.R.D. Just took the biggest stage in the world and killed it.. Great job- I’m sold.. They ended their set at 8:35PM

At 8:40 Matt Pinfield came on stage to pump us up for Gorillaz.. These days, Matt host the morning drive time (6-10AM) show on101.9 WRXP in New York City. Besides mentioning that the show ‘120 Minutes’ will be coming back on the air soon(That’s not a joke).. . He then told us that, get this: LOU REED WILL BE PERFORMING TONIGHT! Holy freaking god this is going to be crazy! Mick Jones, Paul Simonon and Mos Def as well are in attendance and will all be making appearances..

A cartoon character appeared on screen as the lights dim at 9.. “When’s this warm up band going to finish?”, was what this angry green cartoon dude kept asking while looking with one eye straight at the screen straight at us.. Similar shorts like this made 2 more appearances throughout the night- then the screen cuts to a shot of 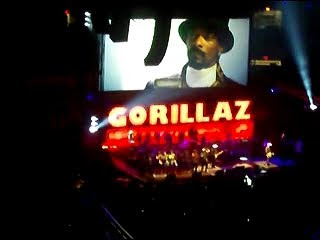 Snoop Dogg- crowd goes crazy as they jump into ” Welcome to the World of the Plastic Beach”, with Snoop Dogg on screen rapping his parts of the song.. The big Gorillaz neon sign on stage is lit and changing colors with moods and sounds.. directing sitting under it in chairs is the orchestral part of the band(horns and stuff) who are not seen- most of the time only being shown in silhouette(which was trippy). Light show is exuberant, different cartoons flood the big screen with each song. This looks like a pretty expensive production (but not over the top in the vein of Pink Floyd/It worked like in the vein of the Flaming Lips). The crowd gets crazier and crazier every song that passes- even I don’t know all these Gorillaz songs, but they’re rocking and there’s nobody in there having a bad time.. “Empire Ants” was pretty jaw dropping to experience live.. Also I had some nice looking ladies dancing in the row to the front of me.. ” Tomorrow Comes Today” almost half way through was the point where I went from really enjoying this night to just starring in amazement, repeating my signature phrase: “Wow”, to myself.. One of those moment where I kept reminding myself I almost didn’t attend this show… 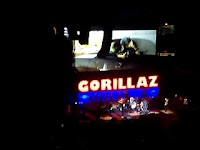 As I looked around to notice the only empty seats in the house were the ones to the far sides and behind the stage which during concerts aren’t sold when the stage is placed where it is. I’m pretty shocked that Gorillaz(intended as a side project mind you) would sell that many more tickets than Alice In Chains two weeks ago. Upon googling it I saw one site listed the show as “Sold Out”- got my Tickets Tuesday night so not sure if that was official or not.. and while I’m taking a look around, allow me introduce you to tonight’s rhythm guitar and bass- Mick Jones and Paul Simonon; they were in some band called ‘ The Clash’, maybe you’ve heard of them. 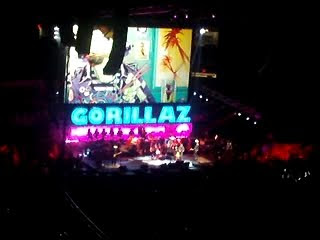 Keeping the melody flowing steady all night.. Then a Gorillaz cartoon version of Lou Reed was shown on screen, with Reed taking a pair of chopsticks to tangled wiring-had the XL forehead going just like the real life version. Reed came out to chants of “LOOOOOOOOOOU” and they played “Somekind of Nature”. During the song I can see(kinda) Reed signaling to the stage hand pointing at his monitor and pointing to the sky. He did this almost the whole song, I’m going to assume that meets “turn this shit up”, but again I’m in section 401 Reed exited the stage after that, as my dreams of hearing Gorillaz doing “Sweet Jane” were shattered. “Super fast Jellyfish” had the group of attractive young ladies in front of me excited, along with the rest of my section. Damon Albarn is a freaking genius man. Him and of course cartoonist Jamie Hewlett have created a monster, blending the brit pop sound of Blur’s front man with completely unfabricated Hip Hop vibes. At one point during the set Jamie wanted to mention about how they played overseas, and then introduced us to what he call the “Arab American “ section of the orchestra. I am so glad he brought that to NYC in the midst of these bigoted New Yorkers complaining about a Mosque “near” Ground Zero. Glad that everyone in the building can see that people who are of Arab decent can  be and are just like all of us-they can be in an awesome friggin’ rock 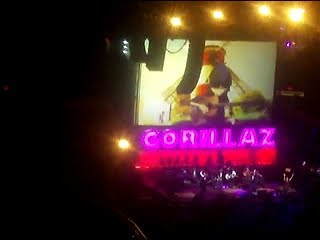 band that is in the midst of ( I must preface this with figuratively)  burning down the house at the Garden. Incredible on so many levels!

Anyway, as the night And the guest list doesn’t  end as after they went off at 10:30 and then ran back out for the encore; Mos Def took the stage for “Sweepstakes”, De La Soul came back out for “Feel Good Inc.” (they may have made an earlier appearances-but the only person I could tell who it was without introduction was Jamie from my distance).. other in attendance performing on songs were Bobby Womack, Bashy, Miho Hatori, Bootie Brown and Yukimi Nagano.. And of course you knew this moment was coming- everyone’s favorite Gorillaz song “Clint Eastwood”, with some of the rap lyrics changed(to the dismay of one of my YouTube commenters), Jamie even jumped the gun on the chorus first time around… It was great, and I recorded every minute of it! . “Demon Days” closed the out this night of insanity. Went off at about 10:53PM

WOW. Gorillaz, Escape from Plastic Beach Tour. Are you serious? Did this band really just put on THAT show? Did they really just tear down Madison Square Garden, the Mecca?? There was not a dull moment during the set.. Of course my personal highlight of the evening-LOU REED 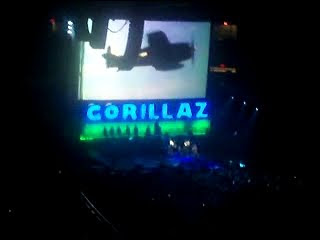 came out and performed! Incredible.. Seriously one thing I gotta get off my chest to everyone right here-I cannot believe I was just in the same building as Lou Reed! That is the stuff of legend.